the exspanded universe is the all the lore in thr star wars universe. this is split up into cannon and legends. cannon is anything comfermed by disney. legends is anything else that hase been created.

The Star Wars space opera media franchise began with Lucas's 1977 film Star Wars, which is set "a long time ago in a galaxy far, far away" and chronicles the attempt by the characters Luke Skywalker, Princess Leia, Han Solo, and the Wookiee Chewbacca—assisted by the Jedi Obi-Wan Kenobi and the droids C-3PO and R2-D2—to thwart the evil plans of Sith Lord Darth Vader and the Galactic Empire. The film was followed by multiple sequel and prequel films. Along the production of the films were an array of derivative Star Wars works (set in the same continuity as the films), including books, comic books, video games, and television series, which take place at the same time as, between, and after the events of the original trilogy (1977–1983) and prequel trilogy (1999–2005). All non-film material produced prior to 2014 was branded as the Star Wars Expanded Universe (SWEU or EU), and was intended as an enhancement to and extension of the Star Wars theatrical films produced by George Lucas; the continuity of all Expanded Universe material was moderated by Lucasfilm, and Lucas reserved the right to both draw from and contradict it in his own works. Although the Star Wars film series itself has never been rebooted, a decision was made, due to works set after the original trilogy that contradict and deviate from Lucas' own view of the Star Wars story, to discard the EU works from the franchise canon. Lucas decided to cease creative involvement after selling, in October 2012, the Star Wars franchise as well as Lucasfilm (the production company of Star Wars) to The Walt Disney Company. When Disney began development of a sequel trilogy of films and other works, and needed its films to have full creative freedom unbound by the EU, nearly all EU works were removed from Star Wars franchise canon and rebranded as Star Wars Legends. (The two 2008 EU works which remained in canon were Star Wars: The Clone Wars animated film and its TV series.) Most of the non-film works produced after April 2014 are part of the official Lucasfilm canon. In April 2014 Lucasfilm officially decreed prior expanded universe content non-canonical, and christened it Star Wars Legends, with a new company division, Lucasfilm Story Group, ensuring that all forthcoming comics, books, games and other media were non-contradictory and true to one another, other canonical media, and the story of the films themselves. From that point onward the official Star Wars canon was clarified to include the Star Wars theatrical films and The Clone Wars animated film and TV series. Works which have since been produced include the Rebels animated TV series, the 2015 film The Force Awakens and its 2017 sequel The Last Jedi, the 2016 anthology film Rogue One, the 2017 video game Star Wars Battlefront II, the 2018 film Solo: A Star Wars Story, and a number of novels and comic book series. 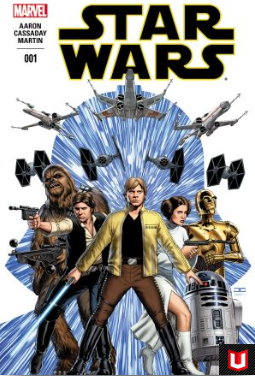 Marvel and star wars have collaborated and have made this series of comics.

This is one of the most popular book series.